Uniper and Fortum’s coal-fired power plants must be shut down!

The Finnish state-owned company Fortum is the largest single owner of the German energy company Uniper. The Finnish state is thus indirectly responsible for huge emissions from coal and gas plants across Europe. Uniper’s annual greenhouse gas emissions are higher than those of the entire Finnish state.

We demand that Fortum exercise its power as a majority shareholder and align its operations with climate science as well as the 1.5 degree target.

Fortum must urgently begin to shut down Uniper’s – and its own – fossil fuel power plants, while also respecting the rights of workers.

Six facts about Fortum and Uniper

Uniper’s annual greenhouse gas emissions (56,8 Mt) are higher than those of the entire Finnish state (52,8 Mt). The emissions from Uniper’s coal-fired power plants alone are equivalent to about half of Finland’s annual emissions.

2. FORTUM IS TRYING TO HAVE IT BOTH WAYS

In its advertising, Fortum promotes change towards a cleaner world and develops new energy solutions. However, with the Uniper deal, Fortum has become one of the most polluting companies in Europe and has not presented a plan to shut down Uniper’s coal plants.

On the contrary, it has even given its blessing to the launch of the new Datteln 4 coal-fired power plant in Germany, which was opened in Germany in May 2020. Uniper has also sued Dutch authorities due to new legislation banning the use of coal in 2030.

3. FORTUM’S OWNERS HAVE A LOT OF POWER

Fortum’s largest shareholders like the State of Finland, Finnish pension insurance companies and banks can ward off climate change by being active owners. In other countries investors have already set an example: at the shareholders’ meetings of big oil giants like Exxon and Chevron, the owners have demanded genuine climate measures from the companies.

BlackRock, the largest investment company in the world, also criticized Fortum’s increased coal risk at Fortum’s shareholders’ meeting in 2020. It’s time for Finnish investors and the state’s Minister of Ownership Steering to wake up and send Fortum’s Board of Directors a clear message that the company’s climate measures are not sufficient.

4. THANKS TO FORTUM, FINNISH PENSIONS ARE TRAPPED IN HIGH-RISK COAL

The funds of responsible investors, such as the Finnish government and Finnish pension funds, cannot be tied to actions which accelerate climate change. Investors must use their leverage to put pressure on Fortum, and the state’s ownership steering policy must be aligned with the 1.5 degree target.

5. FORTUM’S CLIMATE OBJECTIVES ARE NOT SUFFICIENT

According calculations by Climate Analytics, the use of coal in the EU and OECD countries must end by 2030 to reach the 1.5 degree target. However, Fortum CEO Pekka Lundmark has publicly supported the opening of the new Dattel 4 coal-fired power plant in Germany and Germany’s plans to phase out coal only by 2038.

Fortum must update its operations in line with the 1.5 degree target and climate science. It also needs to urgently begin shutting down coal-fired power plants – while also respecting the rights of workers.

Uniper, Fortum’s subsidiary company demands gigantic compensations from the Netherlands due to the state banning coal burning. The burning of coal will be phased out by 2030 in the Netherlands in a manner similar to Finland. Suing states for phasing out fossil fuels threatens to stall similar action all around Europe because decision-makers might dilute essential climate action for fear of a lawsuit worth billions of euros. In addition, Fortum and Uniper also stall climate action by lobbying for fossil gas in the EU.

According to Fortum’s strategy the company intends to put more stakes in fossil gas, and the subsidiary Uniper has announced that it will more than triple the liquid fossil gas it transmits and sells by 2026. They both lack plans for phasing out fossil natural gas. All new investments in gas slow down the shift to renewable energy production. 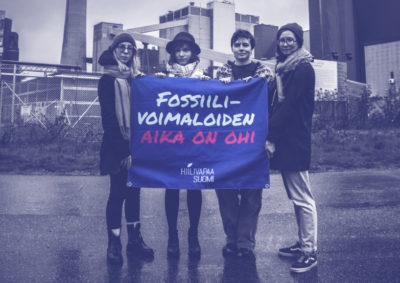 Our demands to Fortum

→ Fortum and Uniper must create a road map for phasing out coal power and fossil gas, including a fair transition for employees

→ Fortum and Uniper’s coal plants must be closed by 2030

→ Fortum ja Uniper must not slow down climate action